Water damage protection system can save your investment

Waking up to a broken hot water tank. Coming home after a night away to find that a faulty valve on an upper level has led to water leaking down to the basement. Entering the cottage after a long winter to discover that a pipe has burst.

These and other scenarios happen regularly, leading to thousands of dollars of damage, says David Masin, co-owner of Ontario Water-Protec Services. He says that in Ontario there has been billions of dollars of water damage in recent years, not to mention the loss of irreplaceable water-damaged belongings. And worst of all, much of the loss was preventable.

“We can help protect you and your most valuable investment,” says David, whose son Nicholas is also a co-owner of the company. “Our products and services mitigate water damage to homes, cottages, and condominiums, as well as commercial properties.”

The system consists of an automatic shutoff valve installed on the main waterline, with sensors set up in key locations throughout the home or cottage. As many sensors as are needed can be installed near pipes, in the bathroom, in the laundry, or in the mechanical room. If the system is being installed during a new build or a major renovation, they can even be installed behind walls where pipes are present.

“If excess water is detected, the sensor sends a signal to the motherboard, which in turn sends the signal to the automatic shutoff valve,” says David. “It just shuts off. You may have a few drips of water, maybe a small puddle. But that’s nothing compared to tens of thousands of dollars in damage.”

Larger properties such as multi-million-dollar estates, condominium buildings, and commercial structures may require more than one Water-Protec system. A typical system including installation costs around $3,000 – a modest fee when compared to the potential cost of water damage.

For larger transactions, Water-Protec has working relationships with financial institutions to provide financing if their clients would prefer.

David advises prospective clients to check with their insurance company as well, since many companies will reduce their rates for homes that have a water damage protection system in place. Just make sure it’s set up by certified and fully-insured installers like David and Nicholas.

After all, he says, it only makes sense: from the insurance company’s perspective and from the homeowner’s, preventing damage is always better and cheaper than cleaning up after the damage has occurred. 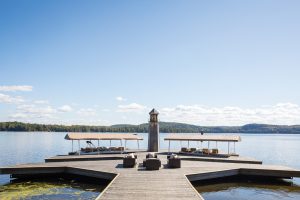 Weather swings are a fact of life in Muskoka. One moment you’re enjoying a sunny boat ride, the next you’re heading for cover to avoid 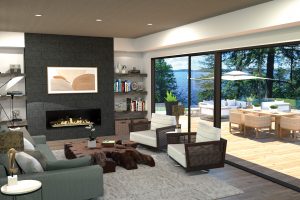 You’ve purchased lot, met with an architect, and now you have the plans in hand. You stand on the property, trying to envision your dream 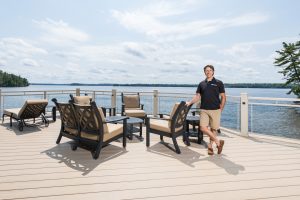 There’s the right synthetic board for every project

Choosing the right type of lumber for your cottage project – be it a deck, dock, or something else – means shopping around and getting